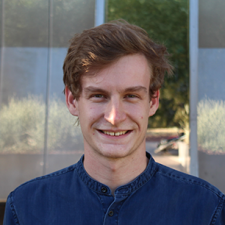 Jake W. Dean is a Master of Arts student in the Center for Latin American Studies with concentrations in Anthropology and Politics & Environment. He is also pursuing a graduate certificate in social, cultural, and critical theory. He leverages his academic background in anthropology, earth science, and history to conduct research around two scholastic foci: (1) political ecology-informed anthropology of the Americas with emphases on water and marine resources (2) historiographical approaches to gender hegemony and equity in North American soccer. He is also a freelance journalist who has published in outlets such as Mexico City's El Universal, Slate Magazine, Tucson Weekly, and the Indian publication The Wire.

Abstract: Located on the coast of a critical Pacific grey whale breeding ground in Baja California Sur (BCS), Mexico called Laguna San Ignacio, Ejido Luis Echeverría Alvarez (ELA) has faced multiple attempts by Mitsubishi to purchase their land development rights to expand their massive sea salt production facilities. Despite pressure from such a wealthy, powerful multinational company, in 2005 ELA became the first ejido in the El Vizcaíno Biosphere Reserve to sell their usufruct rights instead to Pronatura, a Mexican conservation group who maintains the land and associated lagoon as a Pacific grey whale conservation area while also providing economic development funds and ecotourism opportunities to the local community. This attempt at conservation-as-development added to the complex interplay between whaling protections and the fishing industry that historically served as ELA’s central economic industry. In the aftermath of this partial economic transition, Dean's research will focus on the tensions between whale conservation and the fishing industry of ELA, the social ecology and conservation advocacy of the surrounding area, and the rise of the whale-watching ecotourism industry in BCS. Through ethnographic research in collaboration with local stakeholders, he seeks to understand the socioecological and economic impact of this conservation development deal on the multi-species community of ELA.