Monthly Precipitation and Temperature: August precipitation ranged between record driest and below average in most of Arizona and New Mexico (Fig. 1a). August temperatures were record warmest in all of Arizona and much of New Mexico (Fig. 1b). The daily average temperature anomalies for Aug 1 – Sept 15 (Fig. 2) highlight the fluctuations at select stations around the region, including the very warm temperatures in most of August and early September, as well as the steep drop in temperatures across the Southwest in the second week of September. 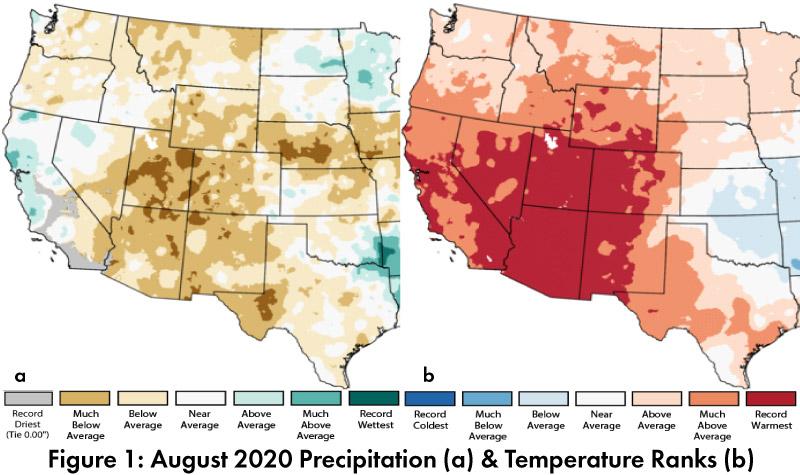 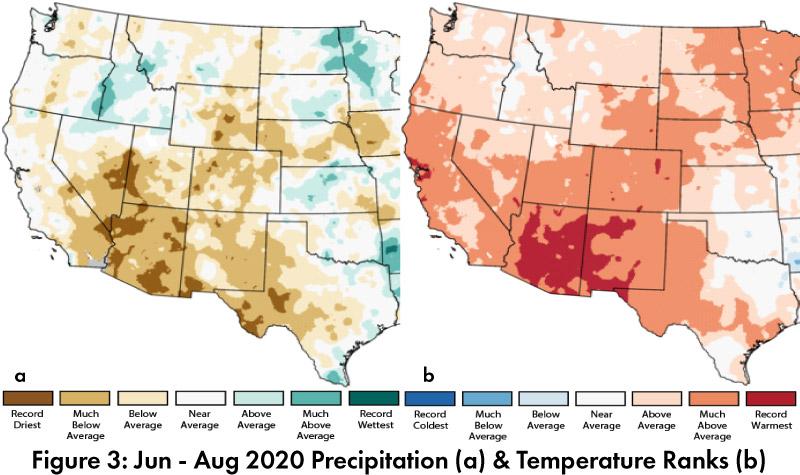 Water Supply: Water year precipitation to date (Oct 2019 – Aug 2020) was near normal to above normal in southwestern Arizona, southern New Mexico, west Texas, and southern California; while the Four Corners, northern New Mexico, and southern Colorado were below normal or much below normal (Fig. 4). Many of the reservoirs in the region are at or below the values recorded at this time last year, and most are below their long-term average (see Arizona and New Mexico reservoir storage). 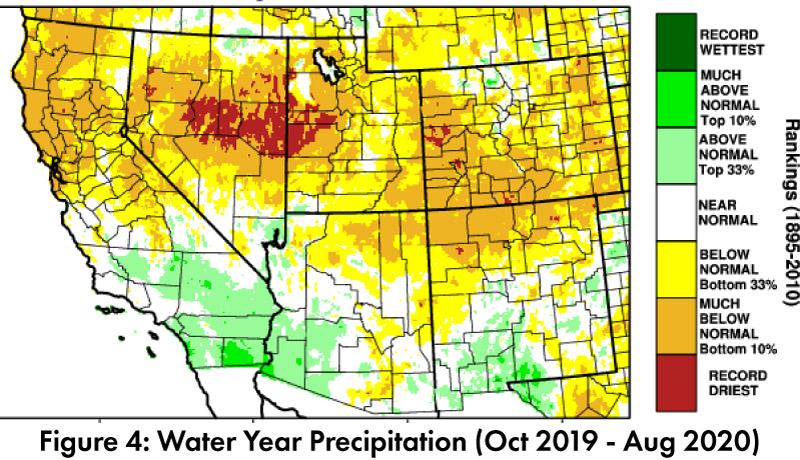 Drought: The Sept 4 U.S. Drought Monitor (USDM) showed widespread expansion of extreme drought (D3) across Arizona and New Mexico, along with much of Utah and Colorado (Fig. 5). This reflects the below average monsoon precipitation as well as accumulated long term precipitation deficits. 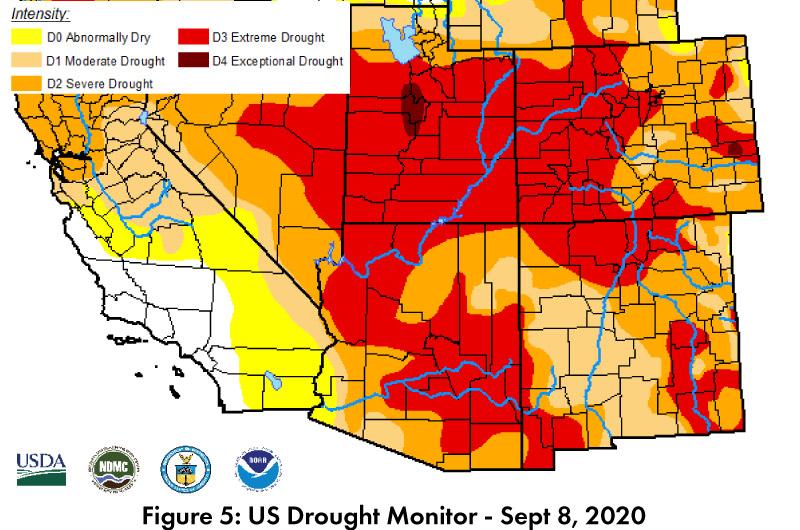 Wildfire: 2020 is a very active fire year in Arizona; wildfire acres burned for 2020 are well above mean and median (1990-2015), and have exceeded the totals for lightning- and human-caused fires in the past 5 years. New Mexico remains below mean and near median, especially human caused wildfire (Fig. 6, data updated as of Sept 13). Widespread fire activity in California, Oregon, and Washington has also spread smoke across the west, including Arizona. 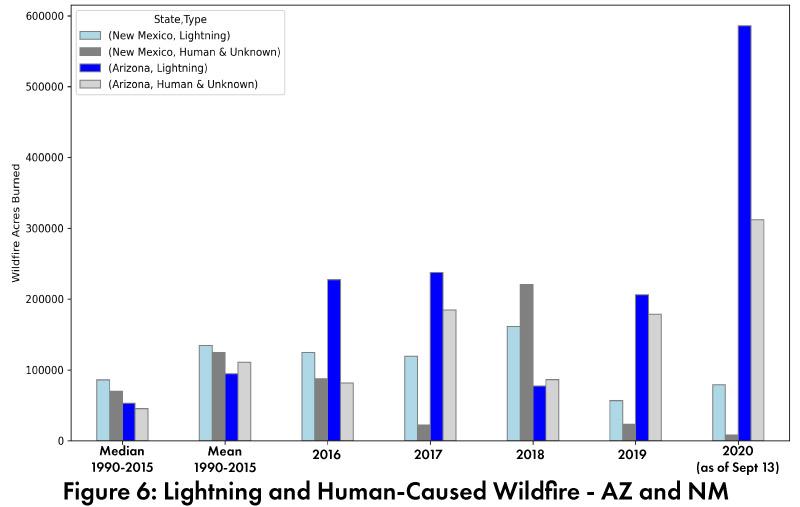 ENSO Tracker: La Niña conditions are present and are expected to continue through winter (see ENSO-tracker for details).

Precipitation and Temperature Forecast: The three-month outlook for Oct through Dec calls for increased chances of below-average precipitation in most of the Southwest and northern Mexico (Fig. 7, top). The three-month temperature outlook calls for increased chances of above-normal temperatures across most of the southwestern U.S. and northern Mexico (Fig. 7, bottom). 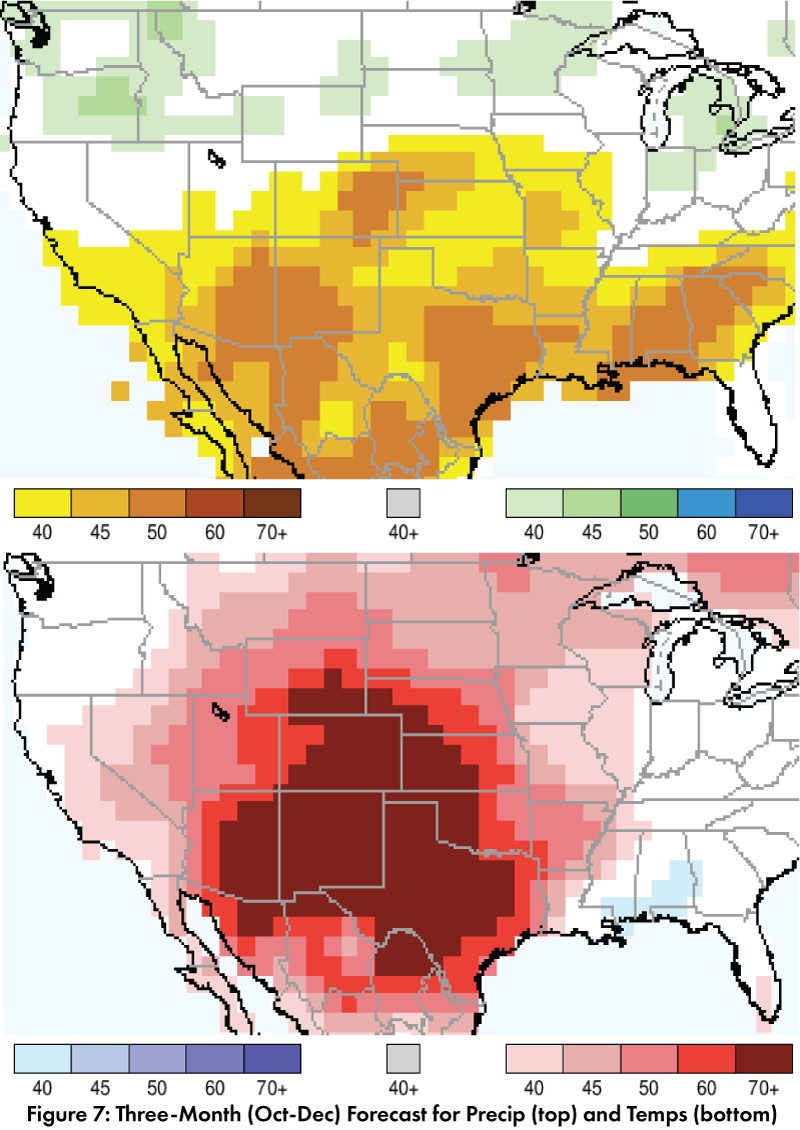