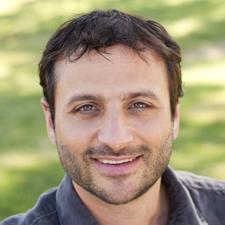 Lilac flowers bloom with cues from the weather. Caribou give birth at the peak of plant abundance so that their newborns have plenty to eat. In the Southwest, as well as all other parts of the world, variations in the climate trigger life cycle events in plants and animals. Studying these events and their relation to climate is known as phenology. The information obtained is vital for understanding the impact climate change has on humans and ecosystems. 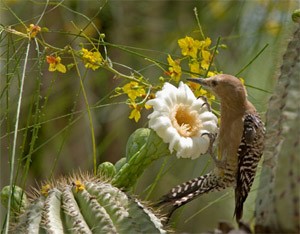 A Gila woodpecker feeding on the flowers of the giant saguaro cactus. The timing of blooming may shift in a changing climate.
Credit: ©Frank Leung, istockphoto.com

Phenology includes the timing of flower blooms, agricultural crop stages, insect activity, and animal migration. All of these events are changing as a result of climate change and these changes impact humans. The date flowers bloom, for example, controls the timing of allergens and infectious diseases—impacting human health—and alters when tourists visit regions to enjoy wildflowers, which impacts economies. Variations in crop phases affect agriculture by influencing the timing of planting, harvesting, and pest activity.

Quantitative assessments of the impact of phenological changes on humans in the Southwest are scant primarily because phenology is a relatively recent scientific endeavor in the Southwest. However, increasing concern about climate change has amplified efforts in the following areas:

Phenology in the Southwest is relatively young and there are only a few observational records more than 20 years old. Nonetheless, records less than 20 years are sufficient to observe trends in phenological changes, and experts believe that changes in life cycle events in the Southwest will be similar to those documented in other parts of the world where longer records exist.

Two of the more important and well-documented effects of climate change on phenology are changes in the date of flowering and food-chain disruptions.

Studies indicate an advance in the date that flowers bloom in the West. Important conclusions include the following:

Important life cycle events in plants and animals are often triggered by each other. When the timing of life cycle events changes in one species, it can disrupt symbiotic relationships and affect other species. For example, in the northeastern U.S., nectar-producing trees currently bloom 25 days earlier than in the past. As a result, honey bees have switched their source of nectar from the tulip poplar tree to black locust tree, impacting the pollination of tulip poplars and causing their numbers to crash. In the Arctic, the peak in plant abundance and caribou births no longer coincide, causing a 400 percent jump in offspring mortality.

Future phenological changes will be localized, depending on the specific plant and animal species and the magnitude of climate change. Some species may profit, while others suffer. In general, flowers will likely bloom earlier and food-chain disruptions will likely be more frequent. Several changes are likely in the Southwest:

In addition, climate change will cause plant species to move in response to changes in temperature and precipitation. This may be most evident on mountains, where changes in elevation help create specific habitat zones within small areas. In the Santa Catalina Mountains near Tucson, Arizona, for example, the habitat of many species has expanded upslope, and to a lesser extent downslope.

The main message is that different plants respond differently to climate and other changes.

The USA National Phenology Network (NPN) is headquartered in Tucson, Arizona. Its mission is to facilitate collection and dissemination of phenological data from the United States. NPN primarily supports scientific research concerning interactions among plants, animals, and the lower atmosphere, especially the long-term impacts of climate change.

NPN encourages involvement in phenological research and provides opportunities for interested people to contribute to science. Scholars, students of all grades, and citizens record the timing of life cycle events in key plant and animal species and submit their observations on-line. In this manner, a detailed database is growing. Currently, 800 people in the U.S. participate in NPN. Among them, amateur scientists in the Southwest have provided some of the more valuable and longer observational data.