Most models now suggest that a weak La Niña event has emerged (Figs. 1-2) and is likely to last through this winter. On Nov. 8, the Australian Bureau of Meteorology called for a 50-percent chance of La Niña forming in 2017, noting that while sea-surface temperatures had cooled, the cooling had stalled, whereas atmospheric indicators had shifted slightly toward weak La Niña. On Nov. 9, the NOAA Climate Prediction Center (CPC) took a stronger stance, identifying the emergence of La Niña conditions in October and calling for a 65- to 75-percent chance of the event lasting through the winter. The CPC forecast consensus took into account below-average sea-surface and sub-surface temperatures as well as atmospheric indicators of La Niña conditions. On Nov. 10, the Japanese Meteorological Agency (JMA) also determined that La Niña conditions had emerged, and called for a 60-percent chance of these conditions lasting long enough to meet the JMA criteria for a La Niña event. The North American Multi-Model Ensemble (NMME) nudged back toward borderline ENSO-neutral conditions in October 2017 (Fig. 4), but a majority of the models predict a swing into weak La Niña this winter while some even veer into moderate La Niña. Notably, very few of the models in the ensemble predict an ENSO-neutral event this winter. 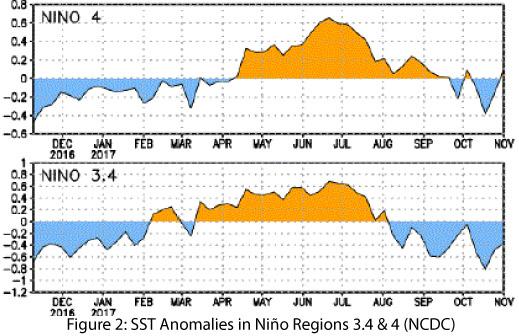 Summary: The seasonal outlooks have mostly converged on a weak La Niña event having formed, and most predict these conditions will persist through February 2018. As noted in last month’s Tracker, the signal is usually clearer by mid-October, but this year there was quite a bit of movement around the boundary between ENSO-neutral and weak La Niña well into the fall. Given the warmer- and drier-than-average winter conditions associated with La Niña in the Southwest, its likely presence may heighten ongoing concerns regarding winter precipitation and persistent drought. Southwestern winters are already relatively dry, however, so the emergence of a weak La Niña doesn’t necessarily ensure an exceptionally dry winter, it just takes wetter-than-average winters off the table, based on past La Niña events (see following page for a few examples). 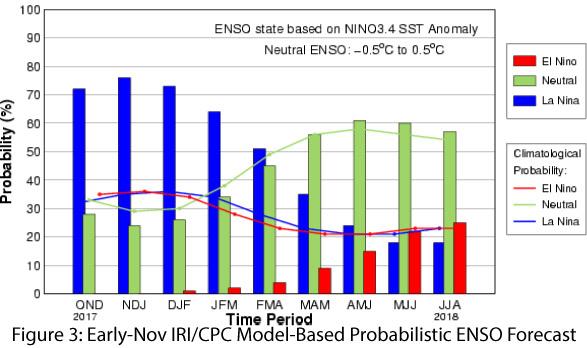 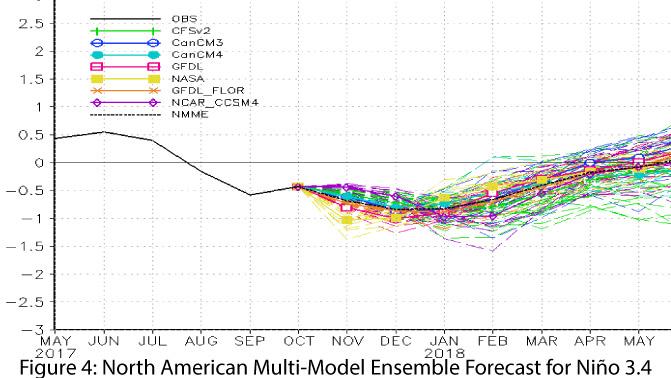 Our cities are what we eat - 2022 CLIMAS E&S Fellows Introductions
A Social Ecology of Whale-Watching Ecotourism in El Vizcaíno
Reflections: Exploring Karst Groundwater Vulnerability and Risks in Arizona in 2021