Notes from an Applied Climatologist: Q & A on El Niño, Predictions, and Indices | CLIMAS
Skip to main content 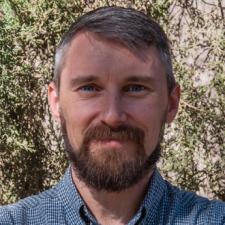 Notes from an Applied Climatologist: Q & A on El Niño, Predictions, and Indices

Notes from an Applied Climatologist: Q & A on El Niño, Predictions, and Indices

What is the criteria to call something El Niño?  Is El Niño a continuum or is there a binary switch where it's either an El Niño event or not?

There are actually several different indices or metrics used to track the state of ENSO (the El Niño-Southern Oscillation) across the Pacific Ocean and whether oceanic and atmospheric patterns reflect El Niño, La Niña or neutral conditions. Some of these indices look just at the atmosphere (for example Southern Oscillation Index), some just at the ocean (for example Niño3.4 index) and some the combination of both (for example the Multivariate ENSO Index). All have different strengths and weaknesses, but oceanic based indices tend to reflect the more slowly evolving part of ENSO, the shift in sea surface temperature patterns, which in turn can have an impact on global weather patterns over many months or seasons.

The NOAA Climate Prediction Center uses the Oceanic Nino Index (ONI) which is the running 3-month average of sea surface temperature anomalies (or departures from average) across a key part of the central equatorial Pacific from just west of the International Date Line back towards the east to 120W longitude.

Tracking sea temperatures in this region provides a good indication of whether or not tropical convection (which is driven by warm waters) is shifting or may soon shift unusually far east along the equator during El Nino conditions or far west during La Nina events. ONI values typically range from -2.5 which would be indicative of a strong La Nina to 2.5 which would be a strong El Nino event. The NOAA-CPC makes a distinction between the emergence of El Nino or La Nina conditions which would be ONI values climbing past the +0.5 (El Nino) or -0.5 threshold at the monthly scale as well as other atmospheric indications like shifts in wind and rainfall patterns versus a full blown event that lasts for many months or over seasons. An event requires ONI values to be greater than the +0.5 or -0.5 threshold for at least five consecutive months (more details at climate.gov)

How closely linked is the strength of El Niño with observable effects in the Southwest?  Would a weak El Niño look that different from no El Niño at all?

The strength of an El Nino event does seem to matter with respect to seasonal climate connections here in the Southwest. Looking at past precipitation patterns during El Nino winters of varying strengths, you notice that strong events (ones with ONI values >1.5) tend to have a more reliably wet look to them versus weak events which vary from above-average to even below-average. 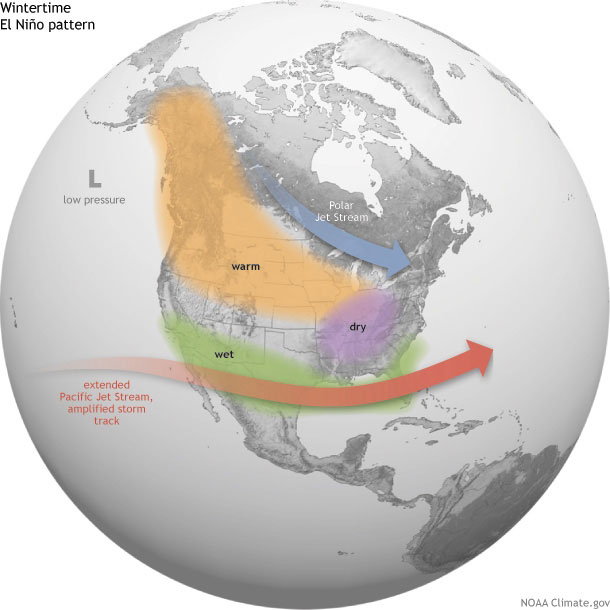 The forecast of a strong El Nino event tends to lead to a subsequently more confident outlook in wet conditions for Arizona and New Mexico. If the event is forecasted to be weak or even moderate the outlook for precipitation over the upcoming winter season is much less certain (more on this topic climate.gov) 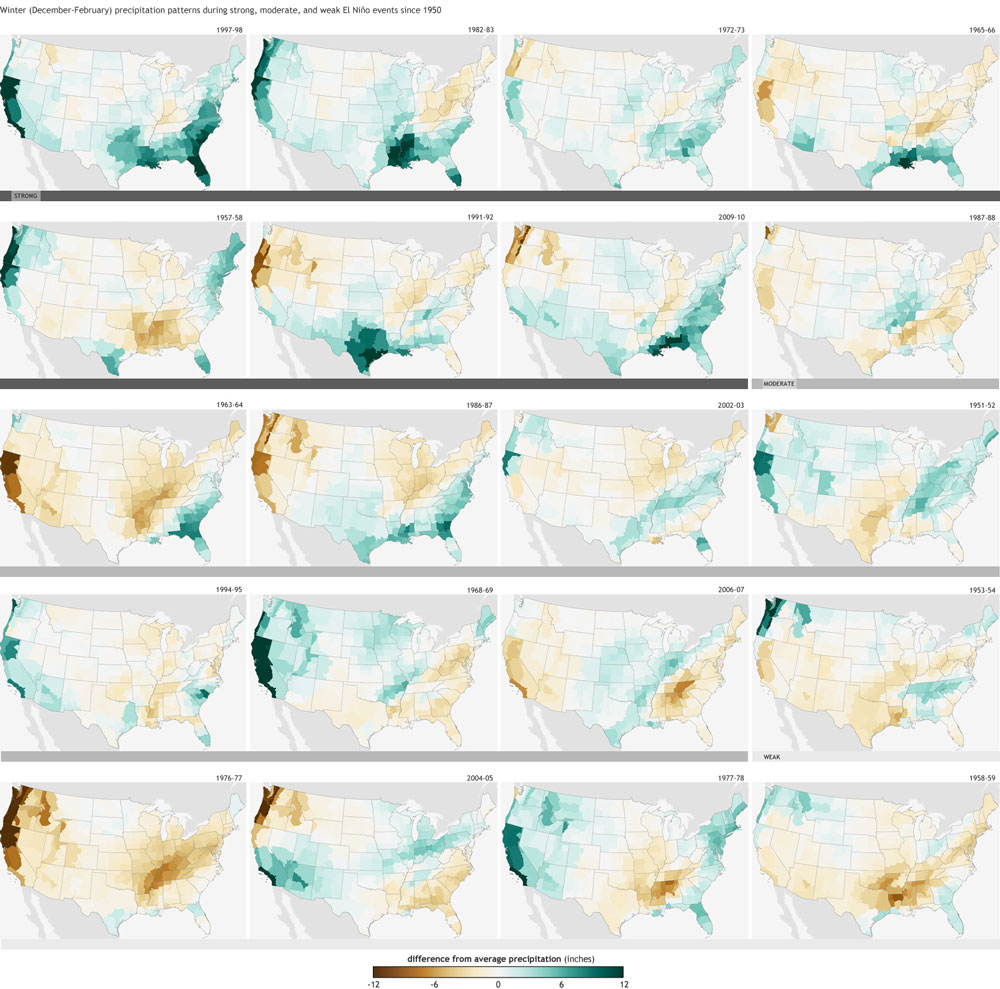