From the Nov 20, 2014 Southwest Climate Outlook

The long-awaited El Niño event projected to develop during winter 2014 – 2015 has yet to send a decisive signal regarding an official start, but a number of factors have increased forecasters’ confidence that one will emerge. The strength of this event still remains in question, however with the most likely projection still centering on a weak or weak to moderate event.

On Nov 6, the NOAA-Climate Prediction Center (CPC) issued an El Niño Watch, assigning a 58 percent probability that an El Niño would form and that it most likely would be weak. This forecast was based on a slight increase of sea surface temperatures (SSTs) across the eastern equatorial Pacific, linked to the contribution of the Kelvin wave (discussed last month), which helped warm SSTs in the eastern Pacific.  The CPC also reported the “ongoing lack of clear atmosphere-ocean coupling” (discussed in our previous Southwest Climate Podcasts) reduced confidence in the forecast.  On Nov 18, the Australian Government Board of Meteorology increased its El Niño tracker status from El Niño Watch to El Niño Alert, with a 70 percent probability of an El Niño developing in winter 2014–2015.  This outlook was based on a recent surge in above-average temperatures in the tropical Pacific Ocean (Fig. 1) and the Southern Oscillation Index (Fig. 2), which exceeded the El Niño threshold for the past three months, despite a lack of complete cooperation on the part of atmospheric conditions. 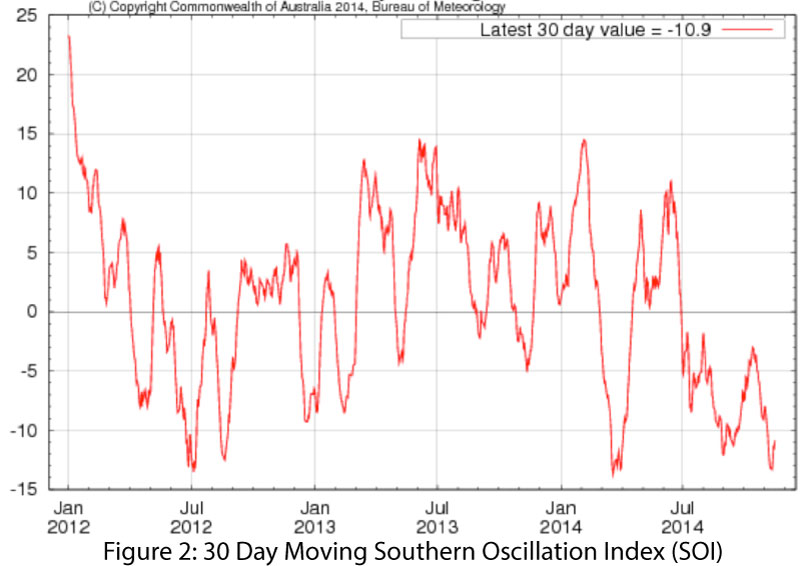 The Nov. 20 International Research Institute for Climate and Society (IRI) and CPC forecast reiterated these points, as the SSTs have exceeded the threshold for weak El Niño conditions, even while some of the atmospheric variables have yet to point towards an El Niño event. The mid-November forecast subsequently upped the probability of El Niño conditions developing to 75 percent (Fig. 3), and the North American multi-model ensemble shows a weak to moderate event peaking in mid to late winter and extending into the spring (Fig. 4). 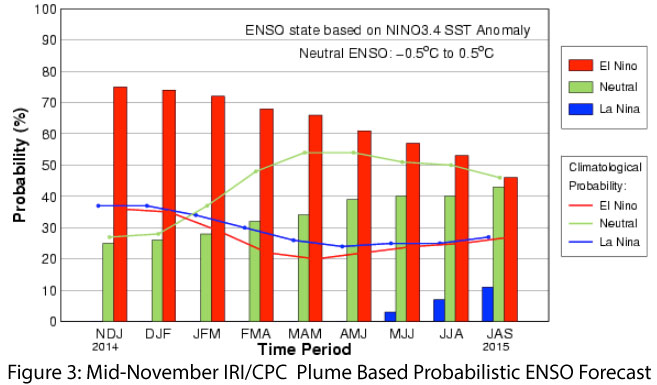 The strength of the event, if and when it forms, will matter. The impacts associated with weak El Niño events are generally less certain than those of a moderate or strong event, with past weak events bringing both dry and wet conditions to the Southwest U.S. during the winter. Seasonal precipitation forecasts still indicate an enhanced chance of above-average precipitation over the upcoming winter, but confidence in this forecast is partially contingent on the strength of the emerging El Niño event. It should also be noted that the signal for the Pacific Decadal Oscillation (PDO) has moved into a positive phase, which bodes well for increased precipitation this winter, especially since the El Niño-Southern Oscillation (ENSO) and PDO signals have the potential to enhance, rather than work against, the other.