Do Hurricanes Impact the Southwest? | CLIMAS
Skip to main content 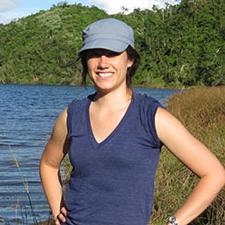 Do Hurricanes Impact the Southwest?

Do Hurricanes Impact the Southwest?

My research explores past and present climate variability in the tropical Pacific and in the Asian Monsoon region, as well as the impact of remote climate variability on western North America. My dissertation research is focused on obtaining interannual to decadal-scale climate reconstructions from lakes in the Galápagos Islands and southwestern Tibet.  I have used one of my lake sediment-based climate reconstructions—a 1200-year record of tropical Pacific sea surface temperatures from the Galápagos Islands— to explore century-scale changes in tropical Pacific teleconnections to western North American drought.

I joined CLIMAS in 2010 as a web editor for the Southwest Climate Change Network (SWCCN), a website jointly administered by CLIMAS and the Institute for the Environment. SWCCN aims to be a dynamic and interactive website that brings climate scientists, decision-makers, natural resource managers and the public together to share information about southwest climate change.

Luckily, we’re pretty landlocked here in the Southwest, so unlike the East Coast, we don’t have to worry about hurricanes causing massive flooding and downing trees and power lines. Or do we? As it turns out, hurricanes and tropical storms in the eastern Pacific play a major role in our moisture budget and rainfall extremes. 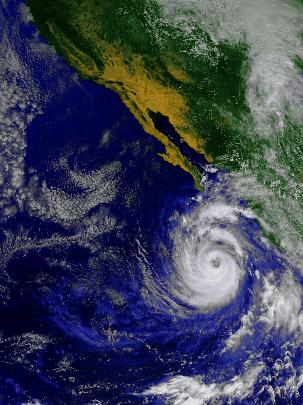 Hurricane Nora near Mexico on September 22, 1997. Image courtesy of NASA.

Most hurricanes and tropical storms that form in the eastern Pacific move westward, toward the open ocean, but in the last few decades, several have turned landward toward the Southwest. For example, the last hurricane to reach Arizona was Hurricane Nora in 1997. By the time it made landfall, it had weakened to a tropical storm, but all that tropical moisture caused high-magnitude precipitation, dam breaks, and flooding from Arizona up to Utah.

How frequently do these tropical storms make it into our region?  Nora was the third and last tropical storm to make landfall in Arizona in recorded history (which starts in 1960, so not very long ago). According to the Tucson, AZ, National Weather Service (they have a very informative page on tropical cyclones in Arizona), we can expect a tropical storm or depression in the Southwest about every five years. Considering the larger southwest region, a recent analysis revealed that 35 tropical storms reached the Southwest (including southern California and northwestern Mexico) from 1958 to 2003—that’s less than 10% of all the tropical storms that occurred during that time period (Corbosiero et al. 2009).

The storms that make it into the desert usually come in late summer/early fall, most commonly in September. Thus, a tropical storm can substantially boost our monsoon season rainfall totals. September is the key month since this is when the Pacific is more active, and also when the jet stream is starting to dip back down toward the subtropics. When tropical storm systems collide with the jet stream, they are deflected northeastward, toward our Southwest (Corbosiero et al. 2009). Once over land, the storms weaken, yet the precipitation from dying tropical storms can make up a large percentage of total warm-season rainfall in the Southwest. Going back to Hurricane Nora, 25% of Arizona’s, California’s, and Nevada’s warm-season precipitation that year was a result of this tropical system (Corbosiero et al. 2009). And the contribution of tropical storms to total precipitation can be even higher when considering the more localized impact of the storms. For example, the Harquahala Mountains in southwestern Arizona, where the average total annual precipitation is only a few inches, received 12 inches of rainfall from Nora in 1997! (see map of Nora’s impact here)

These numbers seem especially interesting now, since we’re nearing the end of a not-so-fabulous monsoon season. Maybe we should keep our fingers crossed for a well-positioned tropical storm to give us some extra moisture this month?