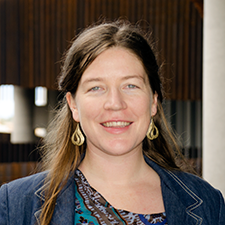 Sarah Kelly-Richards is a 2016 recipient of the Climate Assessment for the Southwest (CLIMAS) Climate & Society Graduate Fellows Program.

Abstract: Globally, renewable energy production is promoted as a mitigation strategy for climate change. Supported by a Fulbright Scholarship in Chile, my dissertation research examines the challenges and potential of small hydropower (typically generating between 1 to 20 megawatts) as form of climate change mitigation. As a CLIMAS fellow, I will conduct outreach informed by research findings that is designed to connect local knowledge of small hydropower development with environmental policymaking. Ultimately, my project seeks to support social justice and environmental sustainability within the transition to renewable energy.

Windy, sunny days, cold nights and mornings, and occasional rains mark the beginning of spring in southern Chile. White flowered plum trees dot the landscape. Hummingbirds and bees buzz between flower treats. The campo is bustling. Long days are dedicated to turning the fields, planting, weeding, and preparing animals for new pastures. Farmers are planting earlier in hopes that plants will be hardier. Not enough rain fell this year, and farmers are worried about summer water supplies. Concerns about drought’s effects are overshadowed by the looming questions regarding ongoing small hydropower development on the many rivers and streams of the sacred Puelwillimapu territory of the Mapuche-Huilliche people. 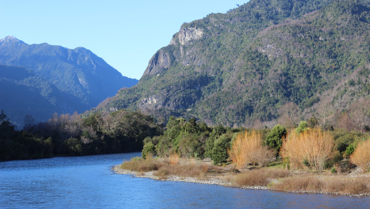 Caption 1: Río Calcurrupe, located in the Andean foothills of the Ríos region, is threatened by aquaculture and hydropower development. It is an important river in Mapuche-Huilliche cosmovision and for recreational fishing tourism.

Economic development and socio-ecological change threaten the mountainous river-lakes system, the native temperate rainforest, and the communities of indigenous people with many thousands of years’ connections to these landscapes. These territorial pressures include hydropower and aquaculture development, seasonal drought, lack of rural education and job opportunities for youth, and the construction of roads and other infrastructure. According to many local actors, the most worrisome change is ‘small’ hydropower development, which, according to some international agencies, is ‘cleaner’ than large hydropower dams. In practice, however, it’s not that simple. Just because a project generates fewer megawatts of energy does not necessarily mean its cultural and ecological impacts are less severe.

To make things more complicated, Chile’s legal recognition of indigenous rights is still in process, hindering the Mapuche-Huilliche peoples’ ability to have a voice about their territory’s future. On the surface, renewable energy appears to be a positive and necessary change for our global energy system. Upon closer inspection, however, it is clear that we need legal and regulatory action to mitigate the negative side effects of these projects, such as habitat fragmentation, water contamination, and cultural value loss, particularly when indigenous territory is affected. We need to think more critically and holistically about how to guide these changes while protecting human rights and critical ecosystems. In terms of climate change policy, this calls for better integration of policy and actions to adapt to a changing climate with those taken to mitigate greenhouse gas production (for example, promoting renewable energy production). 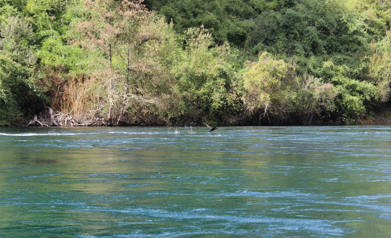 Caption 2: With much of the native forest replaced by agriculture in the pampa (flatlands), rivers arecritical for maintaining biodiversity. Many native species and medicinal plants can be found in the riparian corridor of the Wenuleufu (Río Bueno), which is threatened by proposed hydropower and operating aquaculture projects. Wenuleufu is an important river in Mapuche-Huilliche cosmosvision and history, and for tourism activities including boating, kayaking, and fishing.

When I stepped onto southern Chile soil eight months ago, I knew I wanted to understand hydropower conflicts. After spending time with communities learning about the issues they view as most important, I shifted to studying how: 1) the indigenous consultation process works for hydropower development; 2) changes in water availability (quantity and quality) affect traditional water uses and rural livelihoods; and 3) co-producing basic territorial information with local stakeholders can inform local and regional decision-making processes. As a CLIMAS Fellow, I’ve been conducting grassroots and policy outreach to support this effort. This includes working with Mapuche-Huilliche people, while holding ongoing conversations with the Ministry of the Environment, the Ministry of Energy, the Water Directorate, and members of the private sector.

With local stakeholders in the Bueno River Basin, we’ve developed maps to understand territorial change. For a broader public, we have created handouts on issues such as how the environmental impact assessment process works. I’ve led presentations on different aspects of natural resource governance, such as how the water rights systems functions. In meetings with indigenous people and government officials, I ask how my research can best inform their needs, and what are their lingering questions. These recurrent dialogues guide my investigation, allowing me to pose more nuanced questions as my research advances and our shared understanding grows. Through this ongoing exchange I am developing some policy recommendations on the environmental, regulatory, and indigenous rights issues associated with small hydropower development. 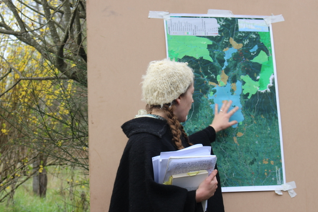 As a scholar coming from another country, part of my contributions are pointing out oversights that are apparent to me through comparative analysis. In Chile, the lack of data on how rivers and streams are altered by climatic change threatens not only rural ways of life and a unique, biodiverse ecosystem, but also energy production. Chile, among many other countries, still has a lot of regulatory steps to take to ensure indigenous peoples and their territories are consulted (according to ratified treaty terms such as International Labor Organization’s Convention 169) and adequately protected. A delicate balance must be found between moving quickly to develop renewable energy on the one hand, and respecting and understanding changing landscapes and indigenous territories. By examining how the law works in practice in river basins of southern Chile, I hope to improve the process of consultation with indigenous peoples, and to better govern small hydropower.

As my indigenous research collaborators often remind me, our modern society occupies such a small blip in time compared to their cultures’ long-term relationships with the rivers, volcanoes, and valleys of Southern Chile. I’m grateful for the support of the CLIMAS staff and organization in helping me to produce research data with the people and landscapes of southern Chile that traverses the boundaries between indigenous people, government agencies, and other actors. As the warm sun contrasts the cold, damp ground of southern Chile, territorial priorities are being determined. Hopefully, my findings will inform how those decisions are made.