From the Nov 20, 2014 Southwest Climate Outlook 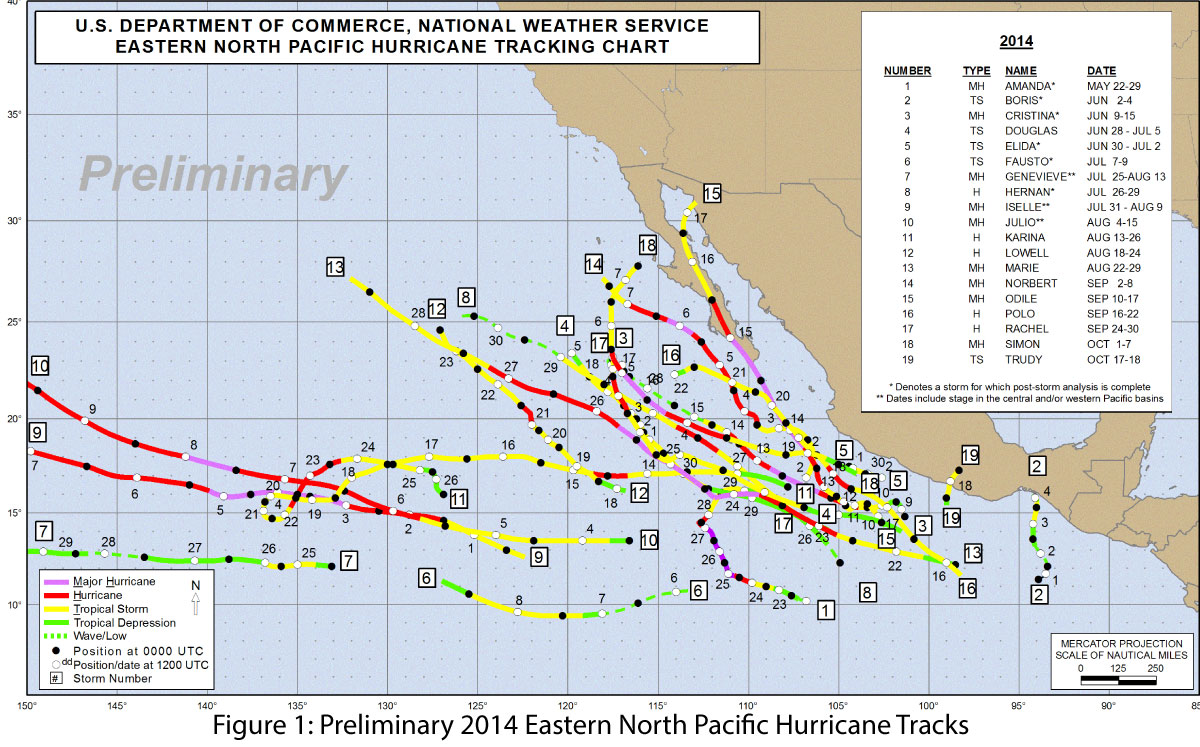 The 2014 Pacific hurricane season was the most active season on record since 1992, with 20 named storms (Fig. 1). Fourteen of those storms developed into hurricanes, including eight major hurricanes (category 3 or greater), also breaking a record held since 1992. This meets or exceeds the high end of the NOAA-Climate Prediction Center (CPC) seasonal forecast (May 22), which predicted 14 to 20 named storms, seven to 11 hurricanes, and three to six major hurricanes. The Pacific hurricane forecast was tied to the ongoing El Niño forecast discussion, as conditions linked to the formation of an El Niño event (e.g., decreased wind shear in the tropical Pacific) also favored increased hurricane frequency and intensity in the Pacific region, and it is safe to say this season did not disappoint.  Conversely, the Atlantic hurricane season was relatively quiet, with eight named storms, six of which became hurricanes, including two major ones.  This was also in line with NOAA-CPC projections of seven to 12 named storms, three to six hurricanes, and up to two major hurricanes.

Seasonal Summary and Impact on the Southwest

The season started off strong and early with Hurricane Amanda on May 24 and continued with a number of early season tropical storms and hurricanes. A few early seasons storms, including Amanda, affected portions of Mexico but largely avoided the Southwest U.S. Most followed the typical early season pattern of staying out in the Pacific Ocean.  Notably, Hurricanes Iselle and Julio headed towards the Hawaiian Islands in late July and early August, with only Iselle actually making landfall.  As the season progressed, later season storms followed the expected pattern of recurving back into the Pacific Coast (see additional resources), and a number of major hurricanes, notably Marie, Norbert (with an assist from Atlantic Hurricane Dolly), Odile, and Simon, veered into the Pacific coast and brought considerable moisture into the Southwest. These incursions of rainfall made substantial contributions to the region’s overall monsoon totals; without them, the Southwest likely would be looking at a very different monsoon picture (i.e., below-average precipitation), particularly in September.

In the Southwest, we are accustomed to the seasonal threat of flooding associated with intense monsoon precipitation, but these storms are generally highly variable spatially and relatively short. Hurricane Odile, as it lumbered into the Southwest, presented a unique threat; it had the potential for widespread flooding over a large area and over a number of days. In a worst case scenario, it could have moved slowly across the Tucson region, and dumped six or more inches of rain across the city and Pima County, not to mention additional flood potential from mountain runoff.

This scenario posed unique challenges for emergency managers tasked with planning and preparing without sensationalizing or inciting fear in the community. Forecasters faced a related challenge of accurately characterizing a storm for which there was limited data available as it moved over data-poor regions of Mexico, knowing that the results of their forecast would be used to make widespread decisions that could prove costly if wrong. The lack of quality data, combined with apprehension about underestimating the threat of Odile, likely contributed to elevated predictions and certain planning decisions.

Ultimately, Odile swung south of its predicted path by about 70 miles, leading to substantial rain events and considerable flooding in the southeastern corner of Arizona and across portions of southern New Mexico (Fig. 1). Tucson may have avoided the worst-case scenario in terms of hurricane impacts, but lingering effects may be more costly.  The general public derided many of the forecasts as inaccurate or unreliable, saw sensational coverage from outside media sources, and were subject to considerable disruptions associated with school, road, and government closures despite no actual flooding in town. These circumstances may contribute to a decreased likelihood to act on emergency decrees in the near future.

In the coming months, CLIMAS researchers will work with regional planners and officials to further explore the experience of Odile as it relates to emergency management planning and forecasting. 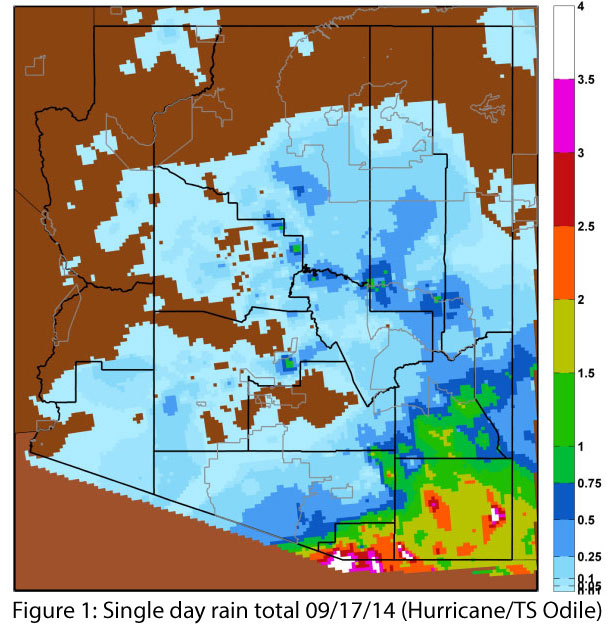